Today I ran the first five and a bit kilometres of Six Inch (OK, power hiked) while Jeremy cycled the whole course to decide whether it is easier on a bike (no, it is not), and to make a video of the course. It was also a good excuse to try out the live tracking feature of Jeremy’s Garmin Vivoactive.

I think this was the first time I’ve been on trail since Six Inch. I had no desire after the race, and it wasn’t until May that I had my first half marathon in a while, and we all know how well the following four months progressed, so this was it.

It was also the first time I’ve run any of it by myself – during training last year we normally ended up running with a mass of people, doing regroups or sheepdog loops, so this was a nice change, to run at my own pace. Because I was able to run at my own pace it reminded me of one of my low points from last year. The sheer frustration of being so tired so early on and not wanting to be the laggard runner in the group brought me to horrible hot tears. Goldmine Hill is noticeably steep, and after that terrible run I decided I wasn’t going to run until after the third kilometre on race day.

Sometime last week I read the first of Bernadette Benson’s blog posts about UTMB (she came seventh female!), and started digging around in her old posts to read more. She wrote one about power and power poses back in October last year, and I loved it. So as I went up Goldmine Hill, I swung my arms, and powered up that climb, taking pleasure in the fact that I was going to run back down it soon.

I reconfirmed my opinion that you need real food on trails. I had my breakfast, but had overpacked with food again (better too much than too little I have learned). I had some leftover banana bread / cake from parkrun yesterday, a Vegemite sandwich and some apricot delight that I hurriedly picked up from the Chinese grocer at Carousel yesterday after I had my hair cut.

The apricot delight made absolutely no inroads on the big hole that appeared in my stomach after about 2 kilometres. I ate one half of the Vegemite sandwich and was fine. I am completely converted to real food for trail running. The effort you expend on trail in comparison to road means that a gel just isn’t enough. I foresee lots of ziplock bags of peanut butter or Vegemite sandwiches in my future.

One thing that I noticed was if I power hike up a hill, once it flattens out my tendency is to just keep hiking. I have to remember to not just look ahead for obstacles or dips and holes that are coming up, but also for when I can start to run again. On race day it won’t be so bad, because there will be people around me, so I will take cues from other people as to the ‘runnability’ of the trail, but it is something to keep in mind. 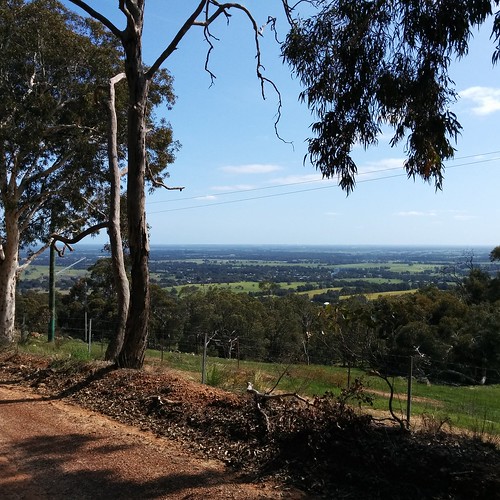 At 5.5km in I turned around and ran back, hiking up the stretches I’ve only ever run down, running with pleasure and slightly surprising speed the last two kilometres of Goldmine Hill. That’s when I took the photo above – I was keeping an eye on my footing and on my speed, and just glanced up and saw out across the valley instead of curving left down the road and I had to stop and take a photo.

I got back to the car and to normal mobile phone reception and opened up the email from Garmin with Jeremy’s live tracking link and fired it up. It told me that if I hoofed it, I could meet him at Aid 2, so I drove to Dwellingup and then 7 kilometres out of town to the Scarp Road/Pinjarra-Williams Road intersection, and nipped in. I only had to wait a couple of minutes before he rode up the track to the car and like a seagull on a hot chip stole the other half of my Vegemite sandwich and a bit of the banana cake.

I met him again at Marrinup townsite and he yelled out as he went past, “Can you please order me a pie and a coffee?”, so I went back to Dwellingup and stopped at the Blue Wren Cafe. The bacon and egg pie is good, but I wish I’d seen the homemade sausage rolls on the way in instead of the way out – they’re the size of your head. As it was, on the way out I got a milkshake to takeaway and Jeremy got a cake. 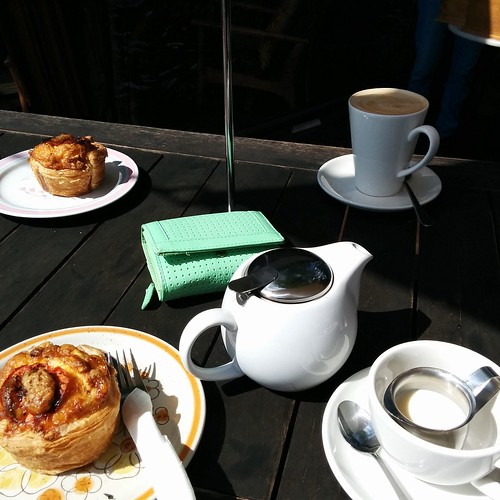 It was a good day.

This site uses Akismet to reduce spam. Learn how your comment data is processed.