I thought the Serpentine National Park race was called Snakes N Ladders because of the “serpent” part of the park name. But I think it’s actually in reference to The Three Steps, a hill that you more slide down than walk down. Although first you have to manage to walk up it before you get to try and walk down it.

My story starts about 10 days ago, on Thursday morning when I woke up with tinnitus. A doctor on the Sunday told me that it wasn’t an ear infection, and the weird ear feeling I had was just because of the tinnitus, and it would soon pass. A different doctor yesterday confirmed that I did have an ear infection (stemming from my sinuses, so that may be why the other doctor didn’t pick it up), and prescribed me amoxycillin. She said that I should be fine to run today’s race. She thought going up hill might be difficult, but I should be OK descending. The ear infection hadn’t caused any actual pain or affected my balance yet, so I hoped that it wouldn’t affect it on race day. Any race plan I had went out the window and became “take it easy and finish, preferably intact”.

Jeremy came with me this time with one of his road bikes in the back of the Captiva. The rules for driving into the park was that we had to have a ‘full’ car – parking is limited, so runners parked 1.5km outside of the park in a field on South Western Highway, and then carpooled into the park. Jeremy and I were cutting it fine, and we pulled into Falls Road and stopped by some runners walking in who accepted the proffered lift into the park. Jeremy leapt out and took his bike to head off up South Western Highway and then Kingsbury Drive, while the three runners hopped in the car and I drove into the park.

Snakes N Ladders starts at Falls Road in Serpentine National Park, and goes up. And up. After a bit over 4km, for approximately 2 km it goes down into a glorious descent on the best bit of valley, turns a sharp right at an abandoned farmhouse (where the aid station is), and goes up and up and up The Three Steps for 1 km. You turn around at a large flat empty grassed area, then go back down the hill to the aid station. If you run the long course, you do the entire course as an out-and-back, whereas the short course directs you straight on instead of back up the glorious descent, and you wind your way about 2 or so kilometres back to the start line. I was very glad I did the short course.

The first 4km hill was rockier than Wallygrunta and I guess it was as steep. Smashrun gave Wallygrunta a 5/10 for hill difficulty, whereas Snakes N Ladders got a 7/10. The course started off constantly going up, interspersed with a few small flatter scoops down just to swing  back up again. You go past a Western Power installation, turn a few corners and suddenly you realise that you’re at the top of what is going to be a ripper descent. It was so much fun flying down this one, although I think I need disc brakes. I’d work out my trajectory balanced with the oncoming traffic and occasionally pull up and stop so people could pass me on the only safe stretch of trail, then off I’d whoop again.

At the end of the race I sat with a few people waiting for Jeremy to arrive back, and we were discussing The Three Steps, and Felix said he thought that it was harder than The Escalator on Six Inch, and I’d have to agree, it’s just that The Escalator is 34km into a race, instead of 6.5km in. With The Three Steps you’ve just gone up for four kilometres, and then barrelled down a hill, turned right and then right again as you go past the abandoned farmhouse. Once past the house you look up to see human shaped tiny specks going up this ridiculous hill. You get further up the hill, and then you hit the worst part. I’d seen people go past me as I’d made my way down the 2 km descent who looked fairly dusty and when I came across Dale-Lyn Russell she told me I was far too clean looking for this race and gave me a big hug and transferred a heap of muck onto me. As I continued down the hill I looked back at Dale-Lyn scrambling up and yelled out “What did you do? Your shorts!” and she yelled back “I had to get down somehow, so I came down on my bum!” Her shorts fabric wasn’t visible underneath a mass of red and brown dirt.

At the top of The Three Steps in the first section you have to lean over so far that you’re using your hands to crawl up. You are incredibly aware that if you skid or don’t lean forward enough you’re fairly sure you’ll fall down the hill behind you. The entire area around this farmhouse must have been cleared for farm animals sometime in the past, so there are no trees, just head height plants. The stretch of trail through this cleared space is quite smooth and angled such that it would have been conducive to competitive cheese rolling, so you’d fall a decent way. Once you get to the truly technical section, it’s deep dark red fine powdery dirt, with a few fist sized rocks inconveniently wide apart. As I scrabbled in the dirt for a handhold it made me very glad I’d cut my fingernails short earlier that week. Dennis Tan from Paparazzi On The Run had climbed up to this section and was gleefully taking photos from here. How on earth he successfully managed to navigate that with two cameras I still have no idea.

A series of trenches had been cut across the hill so after that red dirt section you were tucked in the bottom of the first trench. It made you feel a bit safer, like you weren’t going to roll down the bottom of the hill if you slipped clambering up. This section the dirt changed colour, to a dark brown and had small, medium and large rocks throughout. You’d gently stand on the rocks and test their configuration – would they take your weight without shifting and rolling your ankle? Every step is a gamble.

You slowly progress up the rest of the hill, through each trench and eventually make it to a flatter trail to the left which takes you to what would serve as an excellent rescue helicopter landing area. The marshal there directed me to the marked out turnaround point, and asked if I wanted a high five, a hug or a piggyback ride. I took the hug, and he asked me whether I was sure I didn’t want a piggyback too – so I took the piggyback. Good piggyback ride too.

I headed back down the flat trail and then stood at the top of The Three Steps and just gathered my thoughts on how to get back down. I’d seen countless other people had managed it, so clearly it was possible, but I wasn’t sure I really had the courage to Dale-Lyn it, surfing through the dirt with my shoes and my bum. I took dainty little steps, and slowly manoeuvered my way through the trench sections, at one point leaning on a large boulder and pivoting on my hands, throwing my legs around because there was no way I could walk down the section.

I got to the dark red dirt section and this was the hardest bit. There was no catcher trench below me, just clear hillside until the farmhouse. I skidded, and dropped at the knees into a crouch and stopped sliding. I stood up again, and took another small step, and skidded again, landing with my hands out and hitting my bum on the dirt. I got up again, took another small step and then went back down again, but this time quite hard. I felt the impact go from my tailbone up my spine and through the top of my skull. I got clear of the red dirt and back onto the clear hill, and took a few tentative trots down the hill but I could still feel the impact on my skull and decided to walk most of the hill down. I think the impact may have shook my Garmin heart rate chest strap loose, because when I look at my HR graph from here on I have an unusually low HR, but my Fitbit HR graph seems to be about 30 points higher. 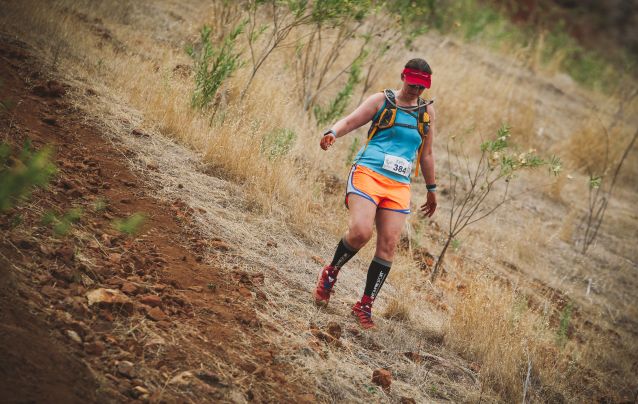 These Perth Trail Series races I’ve been doing just on breakfast – no gels, and with a peanut butter sandwich in my pack as a mid race snack. This time I think a gel would have been justified. It was probably a combination of recovering from the infection, and the sheer effort involved in running the race, but this race was the first time I’ve felt I needed the fruit at the aid station – I normally just go straight through, this race I stopped from both directions to eat banana and talk to two of the Bens – Treasure and Oxwell, and to Felix who’d stopped at the aid station having turned his ankle going up The Three Steps.

On the way back after Ben Treasure ushered me out of the aid station I went to the marshal point where Shona MacDonald was. We talked for a while about Truth or Consequences, the 50k ultra that uses some of the Snakes N Ladders course, including The Three Steps. It’s a two lapper, so even if you do Half Truth, the 25k option, you still have to do the Steps.

By this time my head felt a lot better, so when Shona saw some more runners come up behind me she ushered me down the road towards the finish line. I was pretty stuffed by this point and I was just doing a run walk when I thought I wouldn’t trip over. You have to navigate around a piece of private property, and when I got to the road the other side of it the way was pretty clear and I started running again. The path around the private property had seemed clear at first, but just when I decided to trot on I nearly tripped so I’d stuck with my purposeful march.

I was pleased to see the finish line, and was impressed by what I think is my worst ever time for a trail race – 12km, and 2h26m, which I think is roughly what I did for my first ever half marathon. But I finished, intact and upright.

About 8-10 minutes after I sat down with Ben Harris and Ben Oxwell, Felix and his partner, and Kerri-Ann Bresser, Jeremy rolled into the park with 80k on his bike computer. I bought him a coffee, and we all sat and talked for a while.

It was a good race. But I don’t know if I want to do that hill again, so I suspect the Half Truth 25k is off the cards. We’ll see.

This site uses Akismet to reduce spam. Learn how your comment data is processed.