I’ve been going to the gym very regularly; it’s literally around the corner so it’s super easy to go. It’s as if it’s in our apartment building, but without the increase in strata fees.

Today I did my standard thing, and took some photos and details of what equipment is available at the gym. I am planning on seeing an exercise physiologist that runs for some development exercise programs. I feel like I’ve rehabbed my back and hip sufficiently and now we’re going for progress work.

In my accident prone past, I have seen physiotherapists that do not run, and I have not had a great experience, so that’s my selection criteria for all medical professionals to do with sports injuries, or anything that impacts on my ability to exercise. They need to do the thing that I do.

I’ve also made a list of qualities I’m looking for in an exercise plan, restrictions and guidelines that improve the chance of success.

Firstly, it has to avoid inflaming my foot issue (right foot, capsulitis, second toe). I think I’m on the home stretch with that, but I need to have that sorted before we get really stuck into anything else.

Secondly, I need to even out the strength and ability of each leg. I know that my weak side is my right side. I’ve been doing eccentric one legged squats and concentrating on not dropping my right hip, and that’s easier, but I know I have a hamstring strength discrepancy too. On that point, I want a personally measurable; almost KPI measurement for leg strength and discrepancies.

Which leads into my third goal; I need to work on the musculature that will improve my running form. I’m fed up with tripping up on trail, I need to lift my foot up higher, and I can do it, but it feels unnatural. I think the unnatural feeling is related to muscle weakness, so I want to work on that.

For more specific requirements; I know I’m much happier to do a set time of activity. I’ll be more keen doing something like 2 minute long continual exercises, instead of some arseing about with 4 by 7 sets with 60 second recovery. That just feels like wasting time.

I have a tabata timer on my phone which makes things like 10 times 15 second glute bridges easier, because I don’t have to count seconds and repeats, but I still want minimal stationary rest time. Sitting around in a gym annoys me. I don’t want to piss about.

I need to know how to do an exercise. When I can’t work out how I’m supposed to feel the exercise, I just won’t do it. Activity without obvious purpose is ignored.

The whole show needs to be a maximum of 45 to 60 minutes, in and out the gym door. By the end of that time frame I’m bored. Because I’m so close to the gym I’m not wasting time getting changed at the gym, so it’s not like we need to factor in driving and showering time.

I prefer to do my cardio outside. If you’re putting me on a treadmill then I want to know why. I will happily run in pissing rain and cold, don’t assume otherwise.

I have learnt that I generally prefer free weights over machines, but when it comes to something like abdominals and back extension, machines are more fun because the weights are far far heavier and I’m less likely to injure myself with a poor technique with a machine.

Lastly, I would like to do whatever routine regularly. I pay to access the gym, it’s literally around the corner from my apartment, I don’t mind going frequently. Once a week is nonsense. More is better.

Jeremy had wanted to do Perth Trail Series Eagle and Child for a fair few years, so this year we signed up – him to do Eagle and Child, the half marathon, with me doing Eaglet and Bub, the 10km option.

It was fun – I got a nice wide descent after the hill for me, and Jez running with Emma completing the half marathon in just under 3 hours. When Jez got his medal, Melina (the Race Director of PTS) showed him how the medal for Eagle and Child would connect up with the other two medals for the runs in the Winter Series; Jolly Jumbuck and Truth or Consequences making a circular shield. Jez was sold, he was signing up for the other two races.

Which brings me to this morning, and Jolly Jumbuck at Bells Rapids. I’m not stupid, I went the 13km short course option again.

People talk about trail running, and how much fun it is, and they’re not wrong, but I’ve got to wonder if people whom have never run trail before understand quite how different it is to road running.

On road, the only obstacle you have is the occasional stick, fallen gumnut, wandering stray pet or child. That’s about it. You might have a hill, and it might be an absolute corker, but that’s it, it’s bitumen or concrete. On trail, you have umpteen obstacles, but you also have terrain. Today I clambered up a hill in countless other people’s footsteps, through slick, slippery mud clay and great lumps of granite. The bonus was because I chose the short course option I didn’t have to climb it twice.

We went to Feral Brewery afterwards, where one of Jez’s mates, Jimmy, had reserved a table. We all had a bit of a race debrief over lunch, and Six Inch came up in the conversation.

Jimmy has done three trail races; a section of the Margaret River Ultra, Eagle and Child half and the Jolly Jumbuck short course. He said that we were all mad, doing Six Inch, but I firmly believe that even though Six Inch is 47km long, when you’re running it, I swear it feels easier than a short course Perth Trail Series race.

Six Inch is almost all wide fire trails, and where it is singletrack it’s generally not technical, it’s just beautifully runnable. Perth Trail Series are often technical singletrack, and steep, occasionally muddy hills. The elevation for Six Inch is around 1000m, whereas the elevation for the 13 kilometres I ran today was 445m. The ratios of elevation and distance are completely different.

Today’s run was in the bush around Bells Rapids, which is somewhere Jez had never been before, and if I have, I’ve no recollection. We started from the State Equestrian Centre, down the Orlov Trail to the bridge over Bells Rapids, and into the hills above. Around the four kilometre mark you headed left and up, up, up. 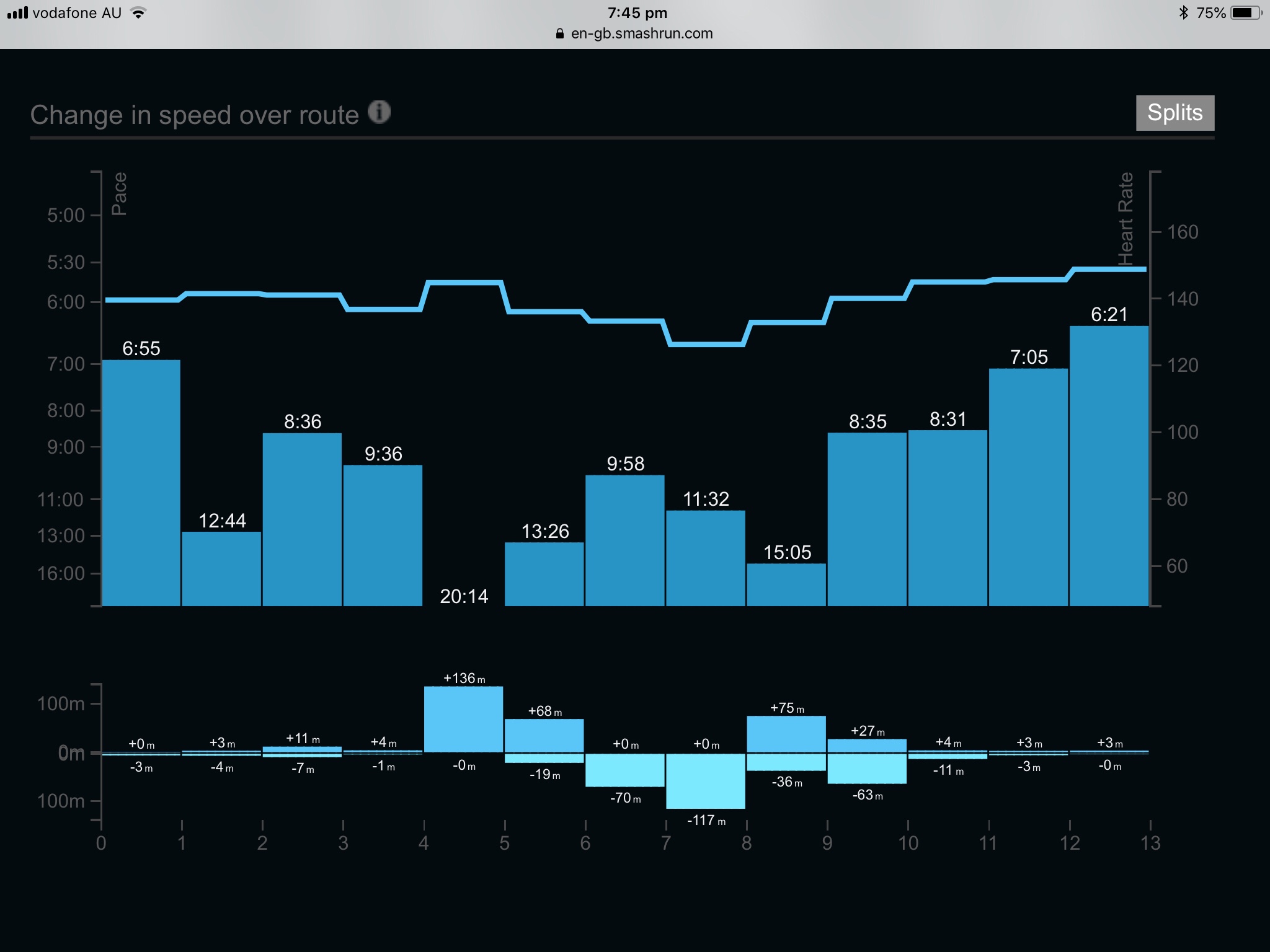 With thanks to Smashrun Pro for the elevation part of this graph.

The first few kilometres were runnable, with a queue and a four minute wait for your turn to navigate a scramble over and around a granite outcrop, but it was beautiful. Because I could trip on cloud, I don’t trust myself to run and look up far ahead on trail, I run along looking at the ground three to four metres ahead of me, for the inevitable rock that I’ll trip on, or – in a fun change today – where everyone’s studded footprints suddenly blur and become lines, indicating that the trail has become mud clay and very skiddy. Every time I wanted to see my surroundings I’d stop to look, and a few times I wasted between a good thirty seconds and a maybe more than a couple of minutes taking photos.

That fourth kilometre has at least two minutes where I stood chatting with The Vicar who was marshalling that spot, directing everyone up the most ridiculous hill; twisty singletrack, skiddy mud and steep. Like Snakes and Ladders’ Three Steps, you occasionally you had to grab the rocks along the laughable path in order to haul your way up.

I’m a much happier descender when I’ve got wide trail and options – let me bomb down a hill picking my way down. I’m still not as fast as others, but that’s where I have courage. If it’s technical singletrack I’m not nearly as good, and today at points I had to hike down. There were some bits today where I think if I were mountain biking I’d have been a tiny bit more confident descending, solely because I’d be wearing a helmet.

The last three kilometres were the reverse of the first three, and because I’d now seen Bells Rapids I didn’t feel the need to stop in wonder every three steps I finally made it a decent pace; that said, the amount of rain we’ve seen has made the whitewater very foamy, and I think this year’s Avon Descent race will be a cracker.

The next race is Truth and Consequences. It’s a 50km two lap ultra, a 25km single lap half and a 10km out and back. I’m of two minds – it’s on the Saturday of the Perth Half Marathon weekend, so there’s no earthly way I’d be able to do a PB at Perth Half after having done the Partial Truth 10km, but the thought of doing all three PTS Winter Series makes me so tempted to ditch the Perth Half and do Truth instead.

Perth Trail Series races are testing, but that sense of accomplishment is fairly addictive. And as Claire Bradstreet posted on her Instagram about today’s race “Lost for words and a little traumatised, but alive”.